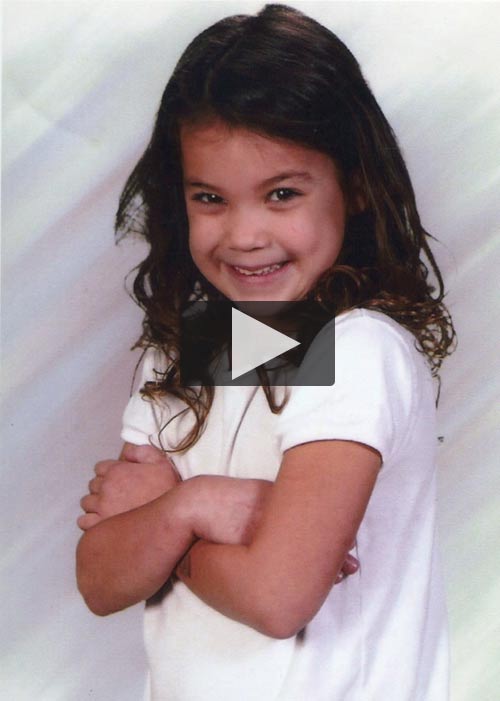 Nicole was an amazing girl, full of life and full of love. Her smile was always her calling card and will forever be how she is remembered. She was born on March 2, 1999 in Plano, Texas to Chris and Deirdre Wilson. The 3rd of what would be 4 children, Nicole was unique from the beginning. We almost lost her before she took her first breath as her umbilical cord was in a knot prior to birth. As the doctors delivered her they were amazed the knot hadn’t tightened. Our little miracle was born.

Early in Nicole’s life we noticed something was not 100% with her. Her hair was not growing, she was always thirsty – although she called it ‘hungry’. And she was filling way too many diapers a day. Her grandfather had passed away at age 28 from complications with Type 1 Diabetes and we have many family members in the medical field. So we suspected the worst. Her pediatrician assured us that if she had Type 1 Diabetes she would be much sicker but that he would test her. Her blood sugar was over 600. Our fears were confirmed. The disease that took her grandfather would impact our family again. She was 2 ½ years old. And it was, ironically, almost Halloween. Our family embraced the challenges – challenges that seemed so overwhelming – because we had no choice. Her mother learned everything there was to know about diabetes and I mean everything. Because her daughter was going to have the best chance possible at a normal life. When the pediatric endocrinologists in Dallas would not put a 3 year old on an insulin pump, we moved her care to Houston. There they understood that the right thing to do was provide Type 1 Diabetes victims with the best care possible. Now, by the way, children around the country are on pumps immediately after diagnosis, regardless of age.

With her disease diagnosed and insulin in her body, Nicole blossomed. Her hair, oh her hair, did it start to grow. Up and out and all over the place. And the smile that lit up a room beamed for all the world. And Nicole began to hear the drums, her own drums, and she marched in whatever way she wanted. She would spend hours constructing conversations between her two fingers. We, of course, thought her blood sugar must be low so we would check – it was fine – that was just Nicole.

Her first seizure happened during a family trip to London in 2002. We were in a hotel in Kensington and it was early in the morning. We all awoke to Nicole screaming and looking around the room, frantic. Her mother yelled she’s having a seizure and our oldest daughter, Kelly, all of about 6 at the time, bolted out of the room and down the stairs to the hotel restaurant. While we held Nicole and tested her blood sugar, Kelly was back in the room with orange juice she “stole” from the breakfast buffet. With her blood sugar rising Nicole came back to us and remembered pink and purple daggers but nothing else. She would have many of these episodes over the next 10 years; 2 or 3 a year. And they were always the same. Wake up screaming, appearing to be hallucinating, and recovering with a COJ (cup of juice). Strangely, sometimes her blood sugar was quite low, sometimes just below normal. On one occasion she recovered quickly and we asked her right away what she remembered. Spikes and fire coming out of the bed, hurting and burning her. Then the smile returned and she was Nicole. We had her tested for epilepsy but the results were negative. Just another part of living with Type 1 Diabetes.

Nicole was a willing participant in everything. Although not really an athlete, no one played sports with more enthusiasm. The basketball might be at the other end of the court but our little girl was beaming that huge smile as she discovered the players had gone the other way. Through the years she gravitated to being the manager on the middle school teams and loved it.

Our neighbors, Nicole’s friends and their parents were eager to learn about her disease and how they could help. Some took on the awesome responsibility of having her sleep over and even travel with them (Thank you Chris and Rebecca Milligan!). And Nicole continued to march to a different beat. Wearing costumes, like the Banana Costume, to school. Wearing the most interesting outfits. Her 4th grade teacher told us one of the best parts of his day was getting the see what Nicole would show up wearing. I would like to say we gave her the freedom to explore her individuality but it is more apt to say she took it.

And we discovered Camp Sweeney and our world expanded and Nicole’s life changed forever. Camp Sweeney in Whitesboro TX is a camp dedicated to children with Type 1 Diabetes and their families. Camp Sweeney not only teaches the kids how to manage their diabetes, it is dedicated to helping them find the inner strength to truly live with diabetes. All our children attended but it became Nicole’s life line. When her best friend Catelee, a nonee or non-diabetic, attended for the first time she wrote home to her mom saying Camp Sweeney was the first time in her life she felt like she could be herself. No judging. Everyone accepted. An amazing place, worthy of our admiration and support. Nicole’s favorite place on earth. And the focus of our mission.

Nicole, you were a true spirit. We love you so much. And miss you every day. We are broken without you. But we dedicate ourselves to your memory and to helping kids just like you. We will never, ever stop singing for Nicole.

Nicole Bergen Wilson was born March 2, 1999 in Dallas, Texas to parents Chris and Deirdre Wilson. God blesses you with children. But he doesn’t necessarily give you the knowledge of how to raise them. No owner’s manual. So you do your best – taking cues from how your parents raised you, friends, etc.

Then you find out one of your little angels have a broken wing and she can’t fly straight. And no one can help you. So you pray. And in our case, Nicole’s mom learns everything there is to know about diabetes. And she knows everything! And you do your best to teach this little girl to live life and love everyone and to never let her broken wing keep her down. And you see her grow and blossom. And you see her flying crooked, and Nicole flew crooked, topsy turvy and mostly upside down. And it’s OK. In fact, it’s wonderful. And if your heart is open, you find out you have friends and family who will do anything for you.

When we met the Milligans, they simply said “teach us how to take care of her because we want her in our life.” And we discovered Camp Sweeney and she gained another family that took care of her and that shouldered her problems. Another family for her to lean on. An oasis. Then you start to see her struggle and it breaks your heart. But you know her spirit is strong and she can make it.

Then she doesn’t – she dies. And you find your precious daughter not breathing in her bed. You kissed her goodnight and now she’s gone. And your life changes. Everything you thought was important is not. Everything you prioritized over spending time with your daughter doesn’t mean anything. You just want one more hour with her. And you are willing to trade everything for it. But it’s not possible. So you swallow the grief and the regrets and believe in your faith that she is with God and she is no longer in pain. And that this star that burned so brightly that it burned out in just 15 years will burn for eternity in heaven. And in time, maybe that will be enough. But right now, it’s not. Because we just miss her. We will always miss her.

Nicole is survived by her parents, siblings Kelly, Blake and Luke Wilson, paternal grandparents Richard and Jo Ellen Wilson, maternal grandparents Thomas J. and Frances B. Ryan and many loving aunts, uncles, cousins and friends. A vigil service and visitation will be held Thursday, May 8, 2014 at 7:00 PM at St. Elizabeth Ann Seton Catholic Church, 2700 W. Spring Creek Pkwy., Plano, Texas 75023. A Mass of the Resurrection will be celebrated on Friday, May 9, 2014 at 10:30 AM at St. Elizabeth Ann Seton Catholic Church with The Reverend Monsignor Henry V. Petter, Celebrant. A reception will follow the mass in the Parish Hall.